Imagine loving your work so much that Sunday was an unbearable gap in its pursuit. That any time spent away from work was a terrible bore, and that you often found yourself sneaking back to work despite explicit instructions to the contrary. This was the Soviet dream. I don’t know if this dream stayed confined to the world of storytelling and propaganda or did it come alive in reality. 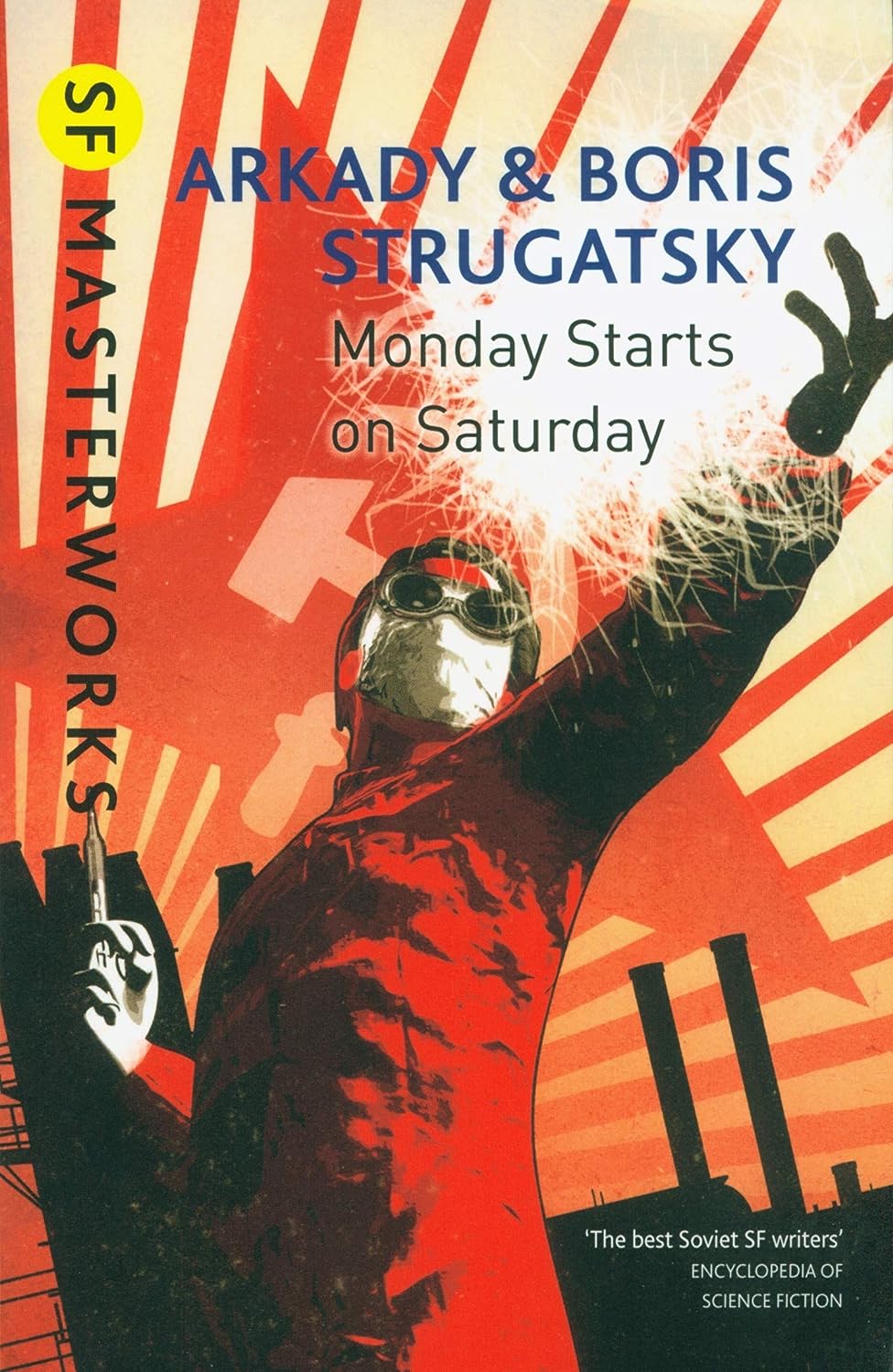 But in the whacky narrative written by Strugatsky duo, a group of scientists live by this ideal and find themselves unable to stay away from their work. Of course their work is meaningful, as they are pursuing happiness. Not just for themselves but for the entire population. And they are going about this pursuit with the power of scientific enquiry.

The story follows a programmer Alexander, who has traveled to the country side to meet friends, but is somehow recruited into an institute of magic by two hitchhikers. During the course of his recruitment and later employment, he encounters a series of bizarre events where folk tales, biblical entities and historical giants intermingle into a hyper-reality, which somehow our programmer takes in his stride without much surprise.

“Any sufficiently advanced technology is indistinguishable from magic”

is the third and most famous law from Arthur C Clarke. Strugatsky brothers play well on this law; the magicians in the institute are really scientists who explore all forms of magical and irrational encounters with a thoroughly scientific process. A magical divan becomes a translator, a mysterious kopek becomes the Center of a long experiment. Meanwhile, each scientist magician is studying a model for happiness using their unique algorithms.

The institute has several departments, those dedicated to linear happiness, absolute knowledge, meaning of life, predictions and prophecies, defensive magic and more. A walk around the department evokes the memory of Harry Potter’s first experience with Hogwarts, except that Hogwarts’ ghosts weren’t as scientifically applicable as Maxwell’s demons.

The story is layered with multiple clues and hints – I caught some and chuckled hilariously. I missed quite a few and the imagery still made me laugh out loud. Imagine a poised cat, who begins to narrate stories in the seriousness of a professor, and keeps forgetting them midway. Or a model of a half satisfied man who cannot stop eating in its pursuit of satisfaction. I particularly enjoyed the doubles – those automatons who are programmed to do only one thing well. You cannot tell them apart from the original humans, except if they show emotion or curse.

I read the book as a satire on the scientific search for happiness and prosperity, the one that Soviet Union was particularly passionate about and widely sponsored. While general population looks for respite in stories of magic and myths and fantastical experiments, a quest for a formula to define what could make mankind happy seems incongruent. This quest to an ideal world has taken possession of many scientific minds, but the fact that happiness continues to be hanging on thread of a word or irrational motivations has baffled many truth seekers. I have often looked for a formula myself , and build arguments complete with a rational and logical analysis to defend a stance. Yet I have myself floundered after only a single conversation with a person radiant with positivity and hope, eager to nose dive into a fiction that is told with eloquence.

What carries us forward? Is it imagination or is it science. I think (and this is what the story alludes to) – it is a balance of both. Imagination gives us the direction in which science can head – it is method and execution which will bring to life what imagination envisioned. Very much like the time traveling motorcycle which can only bring you to a future that writers have already written about. Fiction has a lot more power than fact. Even a solid fact needs a beautiful story before people can open their eyes to it.

Wanderer View all posts by Madhuri